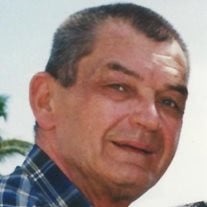 Hillenbrand, William H., 73, of Mokena passed away March 29, 2013. He was preceded in death by his wife Lois; son, Timothy and daughter, Joan Christine Hillenbrand, and is survived by his daughter-in-law, Abby Hillenbrand of Gilbert, AZ;... View Obituary & Service Information

The family of William H. Hillenbrand created this Life Tributes page to make it easy to share your memories.

Send flowers to the Hillenbrand family.