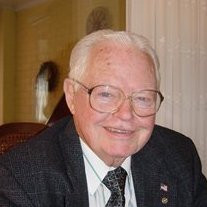 BOOTH Robert Ward booth, 95 passed away on Nov. 20, 2013. Robert was born on June 21, 1918 in Chicago but moved to Chicago Heights at age 4 and lived there for the rest of his life. Robert is survived by his wife of 70 years of Elizabeth (nee Englehardt): two daughters Elizabeth (William) Poor and Barbara (Roy) Goesel; three grandsons Brian (Kate) Goesel, Chris (Kate) Goesel and Mark (Kristin) Goesel and three great-grandchildren Will, Molly and George Goesel. The extended family also includes nephew Robert L. Trempe and caregiver Joann Piraro. He was preceded in death by his father Robert Nugent Booth, his mother Florence Booth Byard, and his sister Florence (Betty) Booth Trempe. Robert graduated from Bloom High School in 1935. He was inducted into the Bloom High School Hall of Fame during the first installation on honorees at Bloom's 75th year celebration in 1975. He also attained the rank of Eagle Scout in Boy Scouts of America. Robert completed both his undergraduate degree in Business Administration in 1939 and his J.D. Degree in 1941 from the University of Illinois Urbana-Champaign. He was admitted to the Illinois Bar in 1941. After serving as a captain in the United States Air Force during World War II, Robert began his career with the International Harvester Company in 1946 as a member of the Law Department. He was appointed Law Department head in 1963 with responsibility for the legal aspects of Federal and Staqte corporate transactions and legal matters arising in the operation of International Harvester's Overseas Division. He traveled throughout the world including Europe, Africa, South America, India , and Asia. In Russia, during the 'Cold War' he helped to free an American citizen, an employee of the Harvester Company who had been imprisoned for a monetary violation. Robert became Corporate Vice President of Law for International Harvester in 1983. He also acted as Corporate Secretary and was an officer and director for many of the Harvester subsidiary companies. Robert was active in his local community his entire life including being a member of First Presbyterian Church of Chicago Heights for over 75 years including serving as Elder and Clerk of Session. Robert served as President of the Chicago Heights Library Board for over 50 years. He was past President of Jones Memorial Community Center in Chicago Heights. As a member of the Rotary Club of Chicago Heights, he was named an Outstanding Rotary Club Member. Other civic posts and activities included Director of the Chicago Crime Commission, Director of the Better Business Bureau of Chicago, Advisory Committee for the Civic Federation, Advisory Committee University of Illinois College of Commerce, Chicago Association of Commerce and Industry, Chicago-Kent College Board of Overseers. Robert was a former member of the Chicago Heights, Olympia Fields, and Tippecanoe Country Clubs, The Executive Club of Chicago, and the International Club of Chicago. He was a member of Phi Gamma Delta Fraternity. He also enjoyed spending time with his family at their summer home on Lake Shafer in Monticello, Indiana Funeral Services will be held at 11:00AM on Friday, Nov. 22nd at First Presbyterian Church 900 Thomas St., Chicago Heights. Interment following at Rest Haven/Presbyterian Cemetery, Chicago Heights. Memorials can be made to First Presbyterian Church of Chicago Heights. For info or to sign the guestbook heartmemorial.com or 708-755-2266.

BOOTH Robert Ward booth, 95 passed away on Nov. 20, 2013. Robert was born on June 21, 1918 in Chicago but moved to Chicago Heights at age 4 and lived there for the rest of his life. Robert is survived by his wife of 70 years of Elizabeth... View Obituary & Service Information

The family of Robert "Bob" Ward Booth created this Life Tributes page to make it easy to share your memories.

Send flowers to the Booth family.