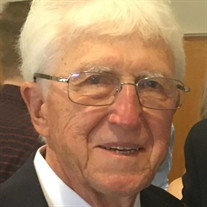 Dr. Richard G. Moutvic, M.D., 88, passed away peacefully in his sleep, February 26, 2022. Husband of the late Mary Friar Moutvic. Father of Richard (Kimberly) Moutvic, Dr. Margaret (Stephen) Wasz, the late Daniel (Mary) Moutvic, Maureen (Stephen) Sheetz, and Peter (Lisa) Moutvic. Grandfather of Katie and Nathan Moutvic, Molly (Casey) Jones, Michael and Sean Sheetz, Allison (Brandon) Lanier, Brian and Christopher Wasz, Matthew and Claire Moutvic, and Ryan and Lauren Moutvic. Great-Grandfather of Quinn Lanier and Josephine Mary Jones. Brother of late Robert (late Jean) Moutvic, Tommy Pekny, and Kathy Krebs. Born to Charles and Barbara Moutvic in Chicago. Dick was a proud graduate of Saint Ignatius College Prep, Marquette University and Marquette Medical College, where he met Mary, his wife of 62 years. Dick served in the U.S. Navy as a Commander from 1967 to 1969 as a physician. He was an OB GYN at Suburban Heights Medical Center and St. James Hospital; and was widely regarded as an innovator in his field and a skilled surgeon, pioneering novel techniques such as laparoscopy. His colleagues have shared that his patient skills and disease management capabilities were without equal. He was a pro-life advocate and a recipient of the Henry Hyde Award from the American Catholic Press. Past President of Franciscan St. James Hospital and Suburban Heights Medical Center, and Chairman of the Board of WellGroup Health Partners. He was also a volunteer at Aunt Martha Health Center, and a long-time member of Lincolnshire Country Club in Crete. He also served as a Board Member of the Illinois Philharmonic Orchestra. Dick loved his family and enjoyed golfing, fishing, painting, reading, and skiing, especially in Steamboat Springs, Colorado. He was an avid traveler, and a long-suffering Chicago Bears and Cubs fan. Visitation will be held at Kurtz Memorial Chapel, 65 Old Frankfort Way, Frankfort, IL on Thur., March 3rd, from 3:00 p.m.-8:00 p.m. and on Fri., March 4th, 8:15 a.m. until prayers at 9:15 a.m. Funeral Mass, 10:00 a.m. at the Catholic Church of St. Mary in Park Forest. The mass will be live streamed. Committal Service following at Abraham Lincoln National Cemetery in Elwood. In lieu of flowers, donations may be made to the Illinois Philharmonic Orchestra. For information or to sign guestbook please visit heartlandmemorial.com or call 708-444-2266.

The family of Dr. Richard G. Moutvic M.D. created this Life Tributes page to make it easy to share your memories.

Send flowers to the Moutvic family.