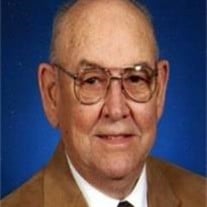 HOGER Melvin Hoger, 80, died in the Christian faith on Monday, March 22, 2010 at St. James Hospice, Chicago Heights, IL Melvin was born on Easter Sunday, March 31, 1929, in Matteson, IL, the son of Otto and Della (Kampe Blume) Hoger. He was brought into the Christian faith and made a child of God through Holy Baptism on April 14, 1929 at Immanuel Evangelical Lutheran Church, Richton Park, IL Melvin was confirmed at Zion Lutheran Church in Matteson, IL on March 29, 1942 affirming his conviction in the Christian faith as it is taught by The Evangelical Lutheran Church. The Scriptural text given to him was 1 Timothy 6:12, “Fight the good fight of faith. Take hold of the eternal life to which you were called and about which you made the good confession in the presence of many witnesses.” Melvin graduated from Zion Lutheran School in Matteson. He married Constance L. Dedert on July 3, 1965 at Salem E & R Church in Quincy, IL Melvin was a dairy farmer until November, 1976. He worked for Vindee Industries for 27 years while continuing to farm. He is survived by his loving wife, two daughters Rebecca Ann (Todd) Chewning of Rockford, IL and Rachel Lea (Michael) Poynter of Thawville, IL; one son James Melvin (Nadine) Hoger of Matteson, IL; five grandchildren Allyson and Bradley Hoger, Amanda, Sarah and Paul Poynter. Also surviving a brother-in-law Chester Ebert of Mokena, nephews David and Mark Ebert and nieces Barbara Quinn, Ruth Welzen and Miriam Wilson. He was preceded in death by his parents and one sister Dorothy Ebert. Melvin was a devoted husband, father, and grandfather. He was a member of Trinity Lutheran Church in Tinley Park. He was active in Walther League, a 4-H leader for 25 years and President of South Cook Fair Assoc. He served as president of Zion’s AAL group for 17 years. Visitation will be held on Wednesday. Mar. 24th , 4:00PM-8:00PM at Heartland Memorial Center 7151 W. 183rd St, Tinley Park. Funeral services will be on Thursday, Mar. 25th at Trinity Evangelical Lutheran Church 6850 W. 159th St., Tinley Park at 11:00AM, following 10-11:00AM visitation.. Interment at Immanuel Lutheran Cemetery, Richton Park, IL Memorials may be made to Trinity Lutheran Church-Tinley Park, The Cancer Society or to the donor’s choice. For info call 708-444-2266

The family of Melvin Hoger created this Life Tributes page to make it easy to share your memories.

Melvin Hoger, 80, died in the Christian faith on Monday,...

Send flowers to the Hoger family.