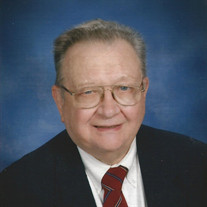 Kenneth Joseph Fulton, age 86, passed away on November 20, 2014. Ken served as the Mayor of Tinley Park from 1965 to 1969. He was a Village Trustee from 1959 to 1963, Chairman of the Civil Service Commission from 1963 to 1965, Bremen Township Collector from 1969 to 1971 and Village Trustee from 1971 to 1999. Ken served in the Army during the Korean War and was a member of the Tinley Park Veterans Commission. Beloved husband of the late Dorothy Young Fulton. Devoted son of the late Clarence and the late Julia (nee Metzger) Fulton. Loving father of Joy (Paul Monson) Fulton of Oak Park, Jim (Teri Lederer) Fulton of Madison, WI and Jane (James Morrison) Fulton of Boston, MA. Cherished grandfather of William and Matthew Monson, Kate, Lindsay and John Fulton and the late Andrew Monson. Dear brother of the late Ron (Judy) Fulton of Tinley Park. Ken graduated in 1951 from the Illinois Institute of Technology in Chicago. He was one of the early leaders in modern television, working as a respected senior electrical engineer for Motorola during the transition from black and white to color television. He was a member of the Tinley Park Lion's Club and was a lifetime parishioner of Zion Lutheran Church. Visitation Tuesday, November 25th from 2 until 8 p.m. at Heartland Memorial Center, 7151 183rd Street, Tinley Park. Funeral Wednesday, November 26th, Visitation 1:00 p.m. until time of Service at 2:00 p.m. at Zion Lutheran Church, 17100 S. 69th Avenue, Tinley Park. Interment Zion Lutheran Cemetery. Memorial donations may be made to Tinley Wish, 7850 W. 183rd Street, Tinley Park, IL 60477 or VFW Post 2791, 17147 S. Oak Park Avenue, Tinley Park, IL 60477 or the American Diabetes Association, P.O. Box 11454, Alexandria, VA 22312. For info or to sign the guestbook (708) 444-2266 or heartlandmemorial.com

The family of Kenneth Joseph Fulton created this Life Tributes page to make it easy to share your memories.

Send flowers to the Fulton family.