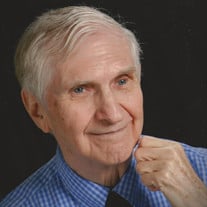 Dr. Joseph E. Farnham, age 86 of Mokena, passed away on April 30, 2015. Beloved father of Deborah Lynn (Larry) White of Mokena, Pamela Jo (David) Herr of Kenosha, WI and Doreen May (William) Pomykala of New Lenox. Cherished grandfather of Joseph James Farnham, Ashley and Sarah Pomykala and John Herr. Dear brother of John (late Mary) Eisen, and the late: Albert (Leota), Lawrence (Theresa), William (Bernice), Frederick (Doris), Garrett (Evelyn) Eisen and Celia (Joseph) Tenzillo. Proud uncle of many nieces and nephews. Joseph touched many lives with his patient heart and kind spirit. He lead by example and was a wonderful teacher and mentor. Throughout his life he persevered despite many physical challenges. He became a distinguished scientist with numerous publications who devoted his career to Argonne National Laboratory by researching the effects of radiation on humans. He graduated from Spalding High School ‘47 and received degrees and honors from the University of Illinois and Northwestern University. He served as President of Summit Hill School District 161 for many years and was a charter member of the Arbury Hills Lion's Club and founded the Arbury Hills Civic Association. He had many hobbies including flying single engine planes, building his own speed boat, model railroading, photography, fishing, and traveling with his family. Memorial donations may be made to Foundation Fighting Blindness, 7168 Columbia Gateway Drive, Suite 100, Columbia, MD 21046 www.blindness.org. Memorial visitation, Saturday, May 9th from 12 p.m. until time of service 2 p.m. at Heartland Memorial Center, 7151 183rd Street, Tinley Park, IL 60477. For info or to sign the guestbook (708) 444-2266 or heartlandmemorial.com

The family of Dr. Joseph E. Farnham created this Life Tributes page to make it easy to share your memories.

Send flowers to the Farnham family.