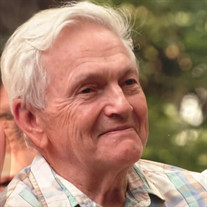 John (Jack) Frederick Theobald Mostert, age 96, passed away peacefully with family by his side on April 11, 2022. Born to Johannes Frederick Theobald and Lucy (Stallings) on November 7, 1925 in Potchefstroom, South Africa. Preceded in death by his wife Charlotte (Zdzinicki) Mostert, son Michael Mostert and grandson Nicholas Mostert. Survived by his brother Paul, Lexington, KY, children Susan(Josh) Meiss, Normal, IL, (Trang) Mostert, Vietnam, Alan (Julie) Mostert, Melbourne, FL, Mark (Nancy) Mostert, Monee, IL, Ruth (Don) Pellegrini, Steger, IL, Tim (Natania) Mostert, Pretoria, South Africa and foster daughter Mary (Kevin) Burr, Mountain Home, AR, 31 grandchildren and 14 great grandchildren, many nieces and nephews, his dear brothers and sisters in the Lord, and his special calico cat April Patches. Previous owner of Artisan Signs in Riverdale, Illinois, Jack was a favorite sign man to countless businesses in the Chicagoland area. An artist from a young age, Jack’s first job at 16 was blowing neon with a sign company in Memphis, TN. At the start of WW2 began Cadet Training in the army Air Corps and in December 1943 was commissioned to Army Air Corp. Finished navigator training in 1945 and was about to be sent to Japan when the bomb was dropped on Hiroshima, and he was sent home. In 1951 he received a letter to report for the Korean War. He responded “I’m in school at the Art Institute of Chicago. Shall I report for duty or wait for further orders?” The Air Force replied “Wait for further orders.” Jack would joke even into his 90s that he was still waiting! In 1955 a Navigator Unit opened at O’Hare Airport, so Jack joined the active Reserves to keep his Navigator skills. Served in the Air Force Reserves through the entire Vietnam conflict, transporting units supplying the war effort on the front lines. Retired as a Major in December 1980 after 20 years of service in the active Air Force Reserves. Jack was not afraid of heights. As a sign man he painted many high, brick walls with ads for businesses, dangerous train overpasses, and even lettered water towers into his 80s. Travelled to Mount Rushmore at the age of 92. He related to the men who carved the presidents from stone. A beekeeper for over 40 years supplying honey to his family and friends. The Nature Centers of Story Book Lodge Christian Camp, Gilbert, Minnesota, Lake Geneva Youth Camp, Wisconsin were able to see a hive encased in clear polycarbonate viewing the buzzing bees and trying to find the queen, and lessons were given to the children by Jack. These camps as well as Circle Y Ranch in Bangor, Michigan received painted signs and other acts of generosity through the years. As a young father of three Jack would say that he was an agnostic but that changed when he met the men at Laflin Street Gospel Chapel in the Englewood area of Chicago. Jack gave his life to the Lord Jesus Christ and spent the rest of his life serving Him. When most of the churches moved to the suburbs during the “white flight” of the early 1960s, Jack and five other white men stayed at Laflin Street where the Sunday School was growing rapidly with black children. It is the only church we know of in the area that has always had a white presence. Jack is the last of those six men to depart to heaven. He listened to his final church service with his dear Laflin Chapel family on Zoom the day before he died. Many lives were changed, touched, and saved because of Jack and Charlotte Mostert and their love for those who came to know them. Racial reconciliation was a way of life for Jack and Char who led by example. Jack’s quiet, kind, generous, faithful, patient, forgiving, long suffering, peaceful, sharp, witty personality and contagious smile will be dearly missed. But we will see him again when we depart this world, as we learned from him how to please the Lord. Please join us in remembering this man we dearly loved. Visitation for John “Jack” Frederick Mostert will be held on Sunday, May 8, from 2:00 p.m.-8:00 pm at Kurtz Memorial Chapel, 65 Old Frankfort Way, Frankfort, IL and at St. Paul M.B. Church, 1404 S. Briggs Street, Joliet, IL on Monday, May 9, from 10:00 a.m. until time of Funeral Service at 11:00 a.m. to Abraham Lincoln National Cemetery, 20953 W. Hoff Road, Elwood, IL for Committal at 1:30 p.m. Per church policy, masks are required on Monday, May 9 at St. Paul's MB Church. For information or to sign guestbook visit heartlandmemorial.com or call Heartland Memorial Center at 708-444-2266. Funeral meal at The Renaissance Center, 214 Ottawa Street, Joliet, IL after as Jack requested, an open mic will be available during the meal for sharing. Please R.S.V.P if attending meal with names. Text/call Ruth (708)307-7333 Also as requested by Jack, all locations are convenient to the other with no more than 10 to 15 minutes from church to cemetery to banquet.

The family of John "Jack" Frederick Theobald Mostert Jr. created this Life Tributes page to make it easy to share your memories.