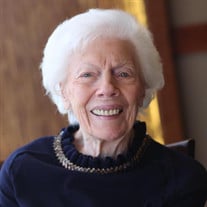 Helen Zinniel Muzzy passed away peacefully on Tuesday morning, January 5, 2021 in the presence of her three surviving daughters. Helen was born October 13, 1924 in Melrose, Minnesota to Frank and Lucy Zinniel. She graduated from Melrose High School in 1942 and immediately began working as a bookkeeper for the local oil company. Helen met her husband, Fred Muzzy, in 1947 when he relocated from Illinois to accept a position at the Kraft cheese plant in Melrose. Fred and Helen were married on September 20, 1948 and for the next ten years remained in Melrose where their first six children, Stephen, David, Mary, Liz, Peter, and Alice were born. Fred and Helen lived for three years in southeast Ohio where their son Michael was born and then settled in the Chicago suburbs where their daughter Carol was born. Helen returned to bookkeeping work in 1966 and continued working in the field until the age of 75 when she retired from the Katten Muchin and Zavis law firm in Chicago. Helen was a loving mother to her eight children and devoted her retirement years to traveling and spending time with them and her grandchildren. She was an amazing cook and loved to host the entire family for holiday celebrations, especially Thanksgiving on the large, enclosed porch on the back of her home in Flossmoor, Illinois. She was a devoted Catholic, attending Mass daily during her retirement years. She was an avid card player (a trait that she acquired from her mother) and until just a few years ago was active in a bridge group in Flossmoor. Most of all, she was a warm and caring person always anxious to meet new people and share stories about family and experiences. Helen was preceded in death by her brother Norb Zinniel and five sisters, Dorothy (Leander) Seifert, Madeline (Jerry) Schmidt, Alice (Ray) Otto, Lanita (Dick) Anderson, and Florence (Louis) Buschaw. She endured the deaths of her son Stephen in 1995, husband Fred in 2009, son Peter in 2010, and daughter Liz in 2019. Helen is survived by her children David (Terry) Muzzy of Laurel, Maryland; Mary (Greg) Underwood of Flossmoor, Illinois; Alice Gately of Homewood Illinois; Michael (Teresa) Muzzy of Rochester, Minnesota; Carol (Jim) Gresens of Flossmoor, Illinois; 20 grandchildren, and 16 great-grandchildren (with 2 more on the way). Helen will be forever remembered by her children and grandchildren as the gentle yet unshakeable source of love and strength that bound the Muzzy family together. She will be remembered by relatives and friends for her kindness, graciousness and optimism. A post-COVID-19 memorial service for Helen will be planned at a later date. Donations in her name may be made to the Sisters Order of Saint Benedict, St. Scholastica Convent, Attn. Sr. Herman Tschida, 1845 20th Ave SE, St. Cloud, MN 56304

Helen Zinniel Muzzy passed away peacefully on Tuesday morning, January 5, 2021 in the presence of her three surviving daughters. Helen was born October 13, 1924 in Melrose, Minnesota to Frank and Lucy Zinniel. She graduated from Melrose High... View Obituary & Service Information

The family of Helen Zinniel Muzzy created this Life Tributes page to make it easy to share your memories.

Send flowers to the Muzzy family.