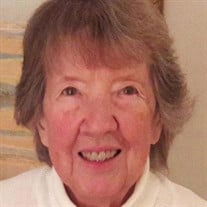 Helen W. Edwards, 96, of Chicago Heights, passed away peacefully on April 11, 2022. She is survived by her children: Georgie (Jim) Resedean of Mokena, Ron Edwards of Chicago Heights, and Susan (Greg) Wall of Downers Grove. Grandmother of Jamie (Steve) Conner, Jodie (Mitch) Stein, Jim (Amy) Resedean, Jr., John Paul Resedean and Alexander Wall; Great-Grandma of Alexis, Casey, Kiley, Kaylee Conner, Joey, Josh, Camryn Stein, Reese, Logan Resedean and J.P. Resedean; Great-Great Grandma of Callaway Conner Topp. Sister of the late Ed (late Mildred) Woodcock, late Barbara (late Richard) Donahue, late George (Marcia) Woodcock, Mt. Carmel, IL, Alma (late Joe) Chapman of GA, Scottie (Ethel) Woodcock of Brownsville, KY and was preceded in death by her husband, Ronald Nelson Edwards in 1991. Helen was born in Brownsville, KY to Melittia and George Woodcock, Sr., April 15, 1925. After graduating high school, she was recruited by Fort Knox to work as a civilian office clerk. The Army was looking for people to work in Korea; she volunteered but her year-long commitment was shortened by the start of the war. Returning to Fort Knox, she met her husband, Ron. Helen continued to work as they moved to various states. Settling in Chicago Heights in 1967, Helen pursued work at Illinois Bell and started there while in her 40s remained until she retired in 1991. Helen was a 50-year member of First Presbyterian Church of Chicago Heights where she served as both a Deacon and an Elder, and was a member of Presbyterian Women and the Martha-Rachel Circle. Beginning in 1991, Helen and her two sisters spent a month each summer traveling by car throughout the continental United States. For 23 years, they set out visiting family and friends while exploring each state and its capital. Their minor mishaps on the road never were revealed until weeks later when a slip of the tongue sent shivers through their children’s spines. Announcing one year (when they were in their 80s) that Alaska was their destination, their families knew that resistance was futile. They left without hotel reservations and, once again, brought back memories of their adventures and bonding. After frequently mentioning that she had been to every state except Hawaii, that journey was completed with her children. A visitation will be held on Friday, April 22 from 4-8 p.m. at Kurtz Memorial Chapel, 65 Old Frankfort Way in Frankfort, IL. Per church policy, masks are required on Saturday, April 23 at the First Presbyterian Church of Chicago Heights. A visitation will be held at the church on Saturday from 10 a.m. until the time of Funeral Service at 11:00 a.m. First Presbyterian Church is located at 900 Thomas St. in Chicago Heights. A Committal Service will be held at a later date in Brownsville, KY. In Lieu of flowers memorials may be directed to the Memorial Fund at First Presbyterian Church of Chicago Heights or to the United States of America Military Veterans, P.O. Box 333, Mt. Carmel, IL 62863. To sign guestbook or for information please visit heartlandmemorial.com or call 708-444-2266.

Helen W. Edwards, 96, of Chicago Heights, passed away peacefully on April 11, 2022. She is survived by her children: Georgie (Jim) Resedean of Mokena, Ron Edwards of Chicago Heights, and Susan (Greg) Wall of Downers Grove. Grandmother of... View Obituary & Service Information

The family of Helen Woodcock Edwards created this Life Tributes page to make it easy to share your memories.

Send flowers to the Edwards family.