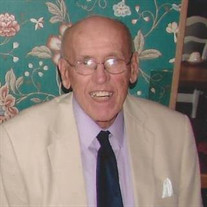 Fred A. "Jake" Jacobeit of Tinley Park, passed away on September 24, 2017 after suffering complications from a stroke. Jake was born on March 24, 1927 and was adopted at birth by Al and Alma Jacobeit. He grew up in the Chicago area, attending Morgan Park High School. He went on to play football at the University of Illinois before being drafted into the Army in 1945. After serving for two years in Germany, Jake finished his college career at Iowa Wesleyan University where he played football and baseball. In 2012 he was inducted into the IWU athletic hall of fame. Jake went on to receive his Master's Degree in Education from Northwestern University. After a four year teaching stint in Galva, Illinois, Jake arrived at Bloom High School in 1954 where he worked for the next 34 years. He coached baseball and football at Bloom and also served for 15 years as the school's athletic director. Jake and his wife Barbara taught ballroom dancing for almost 55 years in the south suburbs. He also served as Director of the Handy Camp Association, sponsored the Federation of Christian Athletes, and was a member of the Chicago Heights Drama Group. In retirement, Jake served as a lay minister, hospice volunteer, and frequently entertained at area nursing homes. He was a 50 year member of the Hazel Crest Community United Methodist Church. He is survived by his wife of 68 years, Barbara, two children, Babs (Carey) and Fred (Audrey), two grandchildren, Jori and Jason, and one great-granddaughter Josephine. He also leaves behind four nephews and two nieces. In lieu of flowers, donations may be made to the American Syringomyelia Alliance Project (ASAP) for spinal cord research, P.O. Box 1586, Longview, TX 75606. A celebration of life service will be held Saturday, October 14th at 1:00 p.m. at the Bloom High School Auditorium, 101 W. 10th Street, Chicago Heights, IL. Arrangements entrusted to Heartland Memorial Center. For info or to sign the guestbook (708) 444-2266 or heartlandmemorial.com

Fred A. "Jake" Jacobeit of Tinley Park, passed away on September 24, 2017 after suffering complications from a stroke. Jake was born on March 24, 1927 and was adopted at birth by Al and Alma Jacobeit. He grew up in the Chicago area, attending... View Obituary & Service Information

The family of Fred A. "Jake" Jacobeit created this Life Tributes page to make it easy to share your memories.

Fred A. &quot;Jake&quot; Jacobeit of Tinley Park, passed away on September...

Send flowers to the Jacobeit family.