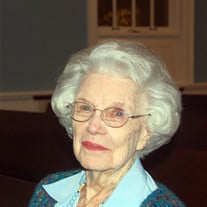 Elizabeth"Ibby" Virginia Engelhardt Booth, age 92, was born in Chicago Heights, Illinois on February 11, 1922 to Mabel and Robert Engelhardt. She graduated from Bloom Township High School in 1939. Elizabeth earned a Bachelor of Science degree in Dietetics from Iowa State University in 1943 and was a member Delta Zeta sorority. During her college years Elizabeth worked for the Chicago Heights STAR newspaper. After she graduated, she was employed with People’s Gas, Light, and Coke Company as a Kitchen Designer. Elizabeth and Robert Ward Booth (Bob) were married on October 17, 1943. Robert was a Captain in the Army Air Force Weather Service, and they lived in East Rockaway and then Lynbrook on Long Island from 1943 until 1946. When they returned to Chicago Heights in 1946, Elizabeth became a Home Economics teacher at Bloom Township High School. Elizabeth and Robert celebrated their 70th wedding anniversary prior to his death in 2013. Elizabeth was elected an Elder of the Presbyterian Church and served a number of years as Clerk of Session for the First Presbyterian Church of Chicago Heights where she was a 50+ year member. She also designed the kitchen for current building. In 2003, she was co-chair of the church’s 160th Anniversary Celebration. One of her proudest achievements was her committee work in helping to establishing and maintaining the History Room for the First Presbyterian Church of Chicago Heights. She was a longtime board member of the Chicago Heights Symphony – now the Illinois Philharmonic, an officer with Roosevelt School PTA, a Brownie Scout leader, a board member of Infant Welfare League and a member of the Sauk Trail Chapter of DAR. Elizabeth was an excellent bridge player. Over the years, she also won trophies for golf and bowling. She was an enthusiastic gardener, and her skills won a community award for her former home on Campbell Avenue in Chicago Heights. Bob and Elizabeth enjoyed traveling, and she had visited four continents. In her later life, she was a board member of the Chicago Heights Historic Preservation Advisory Committee and was featured in a December 2004 CHICAGO TRIBUNE article about the history of Chicago Heights and its current struggles with declining economy and population changes. She also served as a volunteer for Franciscan St. James Health in Chicago Heights. She was preceded in death by her parents, her husband Robert W. Booth, and a great grandson Collin Goesel. She is survived by daughters Elizabeth Booth Poor (William) and Barbara Booth Goesel (Roy), grandsons Brian Goesel (Kate), Christopher Goesel (Kate), and Mark Goesel (Kristin), as well as four great grandchildren Will Goesel, Molly Goesel, George Goesel, and Margaret Goesel, as well as first-cousin Edward Engelhardt and caregiver Joann Piraro. Visitation Wednesday May 28th 10:00AM until time of Service at 11:00AM at First Presbyterian Church 900 Thomas St., Chicago Heights, IL. Committal to follow at Rest Haven Cemetery. A luncheon will be held at the church following the interment. For info or to sign the guestbook heartlandmemorial.com or 708-444-2266.

The family of Elizabeth "Ibby" Virginia Booth created this Life Tributes page to make it easy to share your memories.

Send flowers to the Booth family.