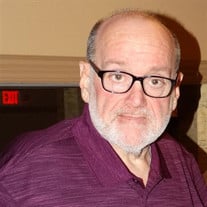 David A. Percudani, a cherished father, devoted grandfather, bowling enthusiast & avid softball coach, passed away on June 12, 2017 following an unexpected stroke that caused irreversible brain damage. He was 61 and lived in Chicago Heights. He was the beloved husband of Wanda (nee Pukis). Loving father of April (David) Galindo of Steger and David M. Percudani of Chicago Heights. Cherished grandfather of David Tristan and Lea Isabella Ann Galindo. Dear brother of MaryKay Dechene, the late Joseph, Ted, Mark (Dawn M.), Mike (Dawn E.) Percudani and the late Cathy Weglarz. He was the proud uncle of 11 nieces and nephews, 3 great nieces and nephews and 1 goddaughter. Devoted son of the late David J. and the late Antoinette (nee Cipolla) Percudani. David was a lifelong bowling enthusiast that started at a very young age and continued on until most recently when he taught his grandson how to bowl. It started off as an activity (at the age of two) and progressed into working at the family owned bowling center (Gateway Lanes) in Chesterton, IN and then at Clearing Bowl as well as Miami Bowl. After moving to the suburbs with his wife and kids he started his career at Dolton Bowl. He started out as a Mechanic, moved up to Manager and then eventually became one of the owners until 2004. In addition to bowling his other love was coaching softball…starting when his daughter was only 9 years old and continuing on until the weekend before he passed away. His coaching career took him from in house teams (OTYA) to travel leagues (including Chicago Heights Hurricanes) to college ball (Prairie State College) and most recently a high school varsity team (Peotone Blue Devils) and the Indiana Intensity 14 & under travel team. He truly enjoyed coaching at all levels but the most important thing to him was to pass along his vast knowledge of the game and helped to improve everyone’s natural talent (either as a player, coach or person). Visitation will take place on Thursday June 15th from 2pm until 9pm at Heartland Memorial Center, 7151 183rd Street, Tinley Park. Funeral Services will be held on Friday June 16th @ 10am. Procession will begin promptly at 10:45am from Heartland Memorial Center to St. Kieran Church, 724 W. 195th Street, Chicago Heights; mass will begin at 11:30am. Interment will take place following the mass at St Casimir Cemetery and a luncheon will follow. For more information or to sign the guestbook please call (708) 444-2266 or visit heartlandmemorial.com

The family of David A. Percudani created this Life Tributes page to make it easy to share your memories.

Send flowers to the Percudani family.