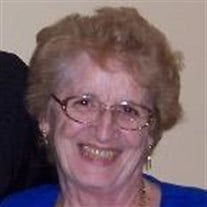 Clydean Ruth Benz, 85 of Gaylord, formerly of Tinley Park, IL and Peoria, AZ, passed away Sunday, February 14, 2016 at Aspen Ridge Retirement Village. Born on July 19, 1930 in Maywood, IL, she was the daughter of Clyde and Vinnie (Nelson) Shippey. On February 12, 1949 Clydean married Richard Benz. She worked for 30 years at Nabisco in Chicago retiring in 1992. As longtime residents of Tinley Park, IL Clydean was an active member of the Lioness Club. After retiring to Peoria, AZ she enjoyed being active in the Illinois Club and volunteering at the Heard Museum. Clydean enjoyed sewing, baking and trips to casinos. She and Richard enjoyed being part of an antique car club in Arizona. They enjoyed traveling, especially trips to Ireland, Germany, Alaska, Hawaii and going on cruises. She will be remembered by her family and friends for the loving wife, mom, grandmother and great grandmother that she was. She is survived by her daughter, Susan (Joseph) Guse of Gaylord; her granddaughter, Jennifer (Dr. Matthew) Mazur of Gaylord and great grandchildren, Natalie, Nicholas and Noah Mazur all of Gaylord; her sister-in-law, Bette (Ben) Samuelson of Fresno, CA and several nieces, nephews, great nieces and great nephews. Clydean was preceded in death by her husband, Richard October 22, 2009; and sisters Inez Summers and Grace Wright. A memorial service will be held at 3:00 PM Saturday, March 5, 2016 at Heartland Memorial Center, 7151 183rd Street, Tinley Park, IL 60477, where the family will visit with friends beginning at 12:00 PM. Those who wish are asked to consider memorial contributions to Hospice of Michigan or the Alzheimer’s Association.

The family of Clydean Ruth Benz created this Life Tributes page to make it easy to share your memories.

Send flowers to the Benz family.