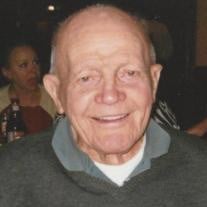 Allen S. Stewart, aged 93, passed away on January 8, 2013. He was born in Indianapolis, Indiana to Dolton and Nell (Allen) Stewart, on March 25, 1919 and was raised in Noblesville, Indiana. He received his BS degree in Civil Engineering from Rose Hulman Institute (formerly Rose Polytechnic), Terre Haute, IN, in 1949. He served in the US Army Air Corp in World War II as a pilot of a C-47 aircraft, stationed in the Aluetian Islands. After the war he returned to the mainland United States and married the former Janet K. Currer in 1953 in Chicago, Illinois. He worked for Factory Mutual Global until his retirement in 1983 when he became a caregiver to his loving wife Janet who was stricken with cancer. He was an excellent bowler in his younger years and an avid golfer in his retirement. He enjoyed travelling throughout the United States and was proud of having visited all 50 States. He has been an active member of the 1st Presbyterian Church of Chicago Heights serving in many capacities. He was preceded in death by his parents Dolton and Nell, brother Franklin Stewart, and wife Janet Stewart. He is survived by his son Doug (Robyn Wicks) Stewart, former daughter-in-law Marcia, granddaughters Kim (Eric) Brummond and Jennifer Clark, great-grandchildren Nicholas, Delaney, Zane, Tanner, Bridget, Sean, and nieces and nephews Robert (Jan) Currer, Joanne (Kevin) Currer, Barbara (Michael) Nee, Vicki (Mike) Jennings, Mike (Sandy) Stewart, Steve Stewart, and Jenny (Terry) Toman. Donations can be made to a charity of your choice. Services will be at 1st Presbyterian Church of Chicago Heights, 900 Thomas Street at 1:00 PM on Saturday, January 12 with a viewing beginning at 10:00 AM. Private family interment at Cedar Park Cemetery. For information, please call (708)444-2266.

Allen S. Stewart, aged 93, passed away on January 8, 2013. He was born in Indianapolis, Indiana to Dolton and Nell (Allen) Stewart, on March 25, 1919 and was raised in Noblesville, Indiana. He received his BS degree in Civil Engineering from... View Obituary & Service Information

The family of Allen S. Stewart created this Life Tributes page to make it easy to share your memories.

Send flowers to the Stewart family.